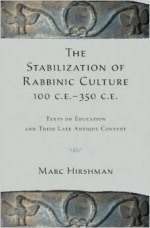 Drawing on the great progress in Talmudic scholarship over the last century, The Stabilization of Rabbinic Culture is both an introduction to a close reading of rabbinic literature and a demonstration of the development of rabbinic thought on education in the first centuries of the Common Era. In Roman Palestine and Sasanid Persia, a small group of approximately two thousand Jewish scholars and rabbis sustained a thriving national and educational culture. They procured loyalty to the national language and oversaw the retention of a national identity. This accomplishment was unique in the Roman Near East, and few physical artifacts remain. The scope of oral teaching, however, was vast and was committed to writing only in the high Middle Ages. The content of this oral tradition remains the staple of Jewish learning through modern times. Though oral learning was common in many ancient cultures, the Jewish approach has a different theoretical basis and different aims. Marc Hirshman explores the evolution and institutionalization of Jewish culture in both Babylonian and Palestinian sources. At its core, he argues, the Jewish cultural thrust in the first centuries of the Common Era was a sustained effort to preserve the language of its culture in its most pristine form. Hirshman traces and outlines the ideals and practices of rabbinic learning as presented in the relatively few extensive discussions of the subject in late antique rabbinic sources. The Stabilization of Rabbinic Culture is a pioneering attempt to characterize the unique approach to learning developed by the rabbinic leadership in late antiquity.